Another missive from budding journalist Katie Hunter, this time from Bolivia:

The intrepid and amusing Katie Hunter sojourns on in Peru:

Cajun Author Has Books, Will Travel and Eat

Now there’s a blog after my own heart.

Save a filched jacket and some altitude queasiness, my intrepid colleague Katie Hunter (AKA “La Tuna) reaches Machu Pichu none the worse for wear:

Top o’ The World To Ya Katie

“Science and art belong to the whole world, and before them vanish the barriers of nationality.” – Goethe

Every now and then, very special global initiatives provide reason for hope that the world is not necessarily going to hell in a hand basket; and that “the indomitable spirit of humankind” is very much still at the core of human civilization. One such example is the Prince Claus Fund and its Cultural Emergency Response program (CER).

Recently I was privileged to cover the European Fine Art Fair in the exquisite city of Maastricht, Netherlands; and to attend a media conference at which Prince Constantijn of the Netherlands (Honorary Chair of the Prince Claus Fund for Culture and Development) gave an eloquent, rather frightening, but ultimately reassuring speech about the precarious state of cultural treasures around the world; and the determined efforts of all those who contribute to the Cultural Emergency Response program.

“Cultural heritage represents – in a way that nothing else does – a community’s link with its past, its collective memory and identity. Besides alleviating direct humanitarian needs [when tragic losses happen to cultural treasures], it is important to rebuild the social fibre of the community…. Creating and preserving cultural heritage is essential for the development of a country’s cultural history. Cultural history gives individuals and societies a raison d’être – it confers respect and identity.” – Prince Constantijn.

Culture as a basic need

The Prince Claus Fund set up the Cultural Emergency Response program, the first of its kind, in 2003 following the looting and destruction of the National Museum of Baghdad. From the beginning, the program was intended to provide rapid “first aid” to cultural heritage sites worldwide that had been subjected to natural or man-made disasters. Because there was no infrastructure in place to deal with the emergency situation in Baghdad in 2003, the Fund set about therefore to provide an ongoing emergency ways and means, in other words a continuing financial infrastructure that could be activated automatically when such disasters occur.

But it is important to understand the essential ethos and universal concept behind these emergency procedures in order to also understand the funding commitment and the actual emergency field work that ensues.

The Fund defines culture as “a creative expression” of all human societies as well as essential “social interaction.” In terms of great art and architecture, these “pillars” of human endeavour also represent our collective identity as a species, and when disaster occurs the symbolic importance of this artistic heritage takes on an even greater importance because culture is “hope and pride” and the foundation on which communities reconstruct their lives. One precedent for the CER program occurred in 1966 when the Arno river overflowed its banks and flooded museums, churches, and libraries in Florence. Inherent in that community of ordinary citizens, however, was an immediate sense of urgency, need, and desire to act. Therefore thousands of volunteers came to the aid of the treasures of their city.

Since the inception of the CER program, emergency relief has been provided to many cultural institutions in such places as Iraq, Iran, Morocco, Palestine, Jamaica, Sri Lanka, Indonesia, and Lebanon. The Board of Directors of the Prince Claus Fund has allocated €100,000 per year to such emergency projects until the end of 2011. However, the Fund also is instrumental in raising additional resources for CER by approaching governments, non-governmental organizations, companies and individuals, such as its initial partners: the Dutch Ministry of Foreign Affairs, the (Dutch) National Postcode Lottery, and even The Centre Céramique of the Municipality of Maastricht, an artistic institution that has taken to heart its responsibility to heritage sites anywhere in the world. The Centre has pledged €10,000 for an emergency response action for a library that is threatened or has been damaged. As an example also of local initiative both artistically and globally, The Centre Céramique is a cultural institution that encourages the people of Maastricht (as well as visitors to this Roman and Medieval town, which was a principal marketplace on the trade route at the heart of the Carolingian Empire) to put art and culture in a historical perspective. As we well know, art and culture travel well, especially along trade routes. That perspective on the role and nature of art in human civilization of course looks back in time as well as to the future; but it also assesses the contemporary importance of all culture to human society. On its own initiative, the Centre has participated in a form of emergency response by helping to establish a library in Rama, Nicaragua. The city of Maastricht also has long-established ties with this Latin American town and in the past has provided other forms of assistance.

In any emergency response initiative, good will and specialized skills are of course essential; but so too is financial aid. And it is initially this financial aid that helps stabilize the situation, when a heritage site is damaged by preventing further damage and by funding the initial, basic repairs in order to achieve long-term restoration goals.

However, in his speech to us Prince Constantijn also emphasized that the Cultural Emergency Response program “operates alongside funds and organizations that tackle direct humanitarian needs. It is not about saving objects rather than people, but about saving both. Thus it is not an “either/or” situation but an “and/and” situation.”

The importance of the infrastructure that is inherent in the CER is the key to rapid response but also the kind of organizational networks that can be activated quickly. Through its intricate global contacts, it learns of cultural disasters and strives to provide emergency relief within a minimum of six months. Because the CER has strong partnerships with other international organizations, it is able therefore, through its critical rescue operations and networks, to integrate with equally strong local networks and partners; and this is a critical strategic element because it is the local cultural experts who know best the actual physical context in which restoration and relief need to occur. They also know what their local communities need most.

Rebuilding stricken communities is of course always a daunting task, but it is not a one-dimensional endeavour. When international agencies go to the assistance of communities that have experienced major disasters, basic humanitarian relief in terms of the necessities of life are of course crucial; but the funds that are injected into the community have an exponential effect as well. Relief and restoration funds provide long-term projects that also involve the rebuilding of key social institutions that in many cases are core community-based facilities. This is especially true of religious institutions that provide the community with many practical services as well as spiritual needs. And the hope and renewed sense of identity that can re-emerge in a community that has suffered great loss has a very real effect on the general well-being of the people.

As Prince Constantijn also pointed out, cultural institutions are the community’s link with the past and its collective memory. When you rebuild a community you also rebuild its cultural institutions and consequently the “social fabric” of the community. When for example a library is seriously damaged, as was the Library of the Central University in Baghdad, a significant component of a community’s educational system is also damaged. Students cannot pursue their studies. Or when the CER helped rebuild a batik centre in Imogiri in South Central Java, it was also rebuilding a workplace for artists as well as their principal marketplace. Cultural Emergency Response therefore is interconnected with the social and economic recovery of a community.

The example of Omara Khan Massoudi

A winner of the Prince Claus Award in 2004, Omara Khan Massoudi is a man who is credited, along with his devoted staff, with preserving some of the world’s greatest artistic treasures. In appearance, he is an ordinary-looking and modest man, but when he spoke to us in Maastricht he demonstrated the quiet courage and common sense that were, I suspect, the principal character strengths and skills that got him through a personal and cultural ordeal.

A steadfast supporter and defender of Afghanistan’s cultural heritage, Mr. Massoudi was working at the National Museum of Afghanistan on the outskirts of Kabul. The treasures in this museum are without a doubt representative of human culture that spans time and space. Because of its location as a crossroads of the ancient trade routes between Asia, India, Africa, and Europe, Afghanistan was also the recipient for centuries of timeless treasures and these were preserved in the national museum. However, the wars that have raged in Afghanistan and its consequent bombings, breakdown of social order, and looting were an unparalleled threat to these treasures in their exposed and unprotected “home” outside Kabul. 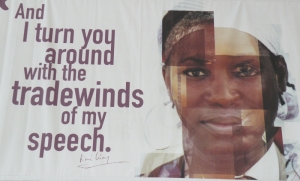 By inspiring other members of the museum staff to follow his lead and to assist him, Mr. Massoudi carried out ongoing evasive action over a number of the most turbulent years in Afghanistan in order to safeguard whatever treasures in the museum he could and also to assess and record existing damage. (Some of the museums outstanding sculptures were deliberately destroyed by the Taliban, and then the world learned of the destruction of the Bamiyan Buddhas in March 2001.) He and his staff took extraordinary risks to preserve the most important items by secretly removing some of them to safe places while disguising others. As a result of Omar’s dedication, personal sacrifice (at one point he survived by selling potatoes in the streets of Kabul) and deep awareness of the importance of culture, he was directly responsible for saving a large proportion of what remains of the museum’s unique collections.

And following my visit to TEFAF and Maastricht, I was once again privileged; this time to see what Omara Khan Massoudi had preserved in a very special exhibit called Hidden Afghanistan at De Nieuwe Kerk in Amsterdam.

“Art is a human activity having for its purpose the transmission to others of the highest and best feelings to which men have risen.” – Tolstoy

“Without art, the crudeness of reality would make the world unbearable.” – George Bernard Shaw

Dispatches From Guatemala: Chichicastenango, And Other Tongue Twisters

Chichicastenango (that’s easy for you to say)

The Riviera Maya: An Education In a Living (not lost) Civilization

Tourists in the Yucatan often ask, “What became of the Maya?”. But unlike most indigenous inhabitants of the U.S., the Maya are still everywhere in the Riveria Maya and Quintana Roo, from the modern splendor of Cancun, to modest, dusty hamlets. My latest article on the region appears here:

The Travel Educators
Blog at WordPress.com.